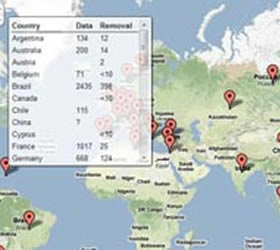 The US government asked Google for user information 4,287 times during the first six months of 2010.

During the same timeframe the UK government put in over 1,000 such requests.

This is just two snippets from Google’s new Transparency Report, a set of tools designed to show censorship levels around the globe.

Civil liberty groups welcomed the tool but called on Google to provide even more detail about the requests.

Earlier this year, Google released details about how often countries around the world ask it to hand over user data or to censor information.

The new map and tools follows on from that and allows users to click an individual country to see how many removal requests were fully or partially complied with, as well as which Google services were affected.

In the US, for example, there were seven court orders to remove content from YouTube from July 2009 to the end of the year.

There is also a traffic graph showing Google services around the world and related traffic outages, caused either by governments blocking access to information or, more mundanely, cables being cut.

“Last year after the Iranian elections access to the internet was cut off and we saw a sudden drop in traffic to YouTube,” he said.

Civil liberties groups said the tool would prove invaluable to activists determined to plot against government censorship around the globe.

“I think it is a tremendous initiative and it would be helpful if other networks could do the same thing,” said Lilian Edwards, professor of internet law at the University of Sheffield and board member of the Open Rights Group.

“I think there will be some embarrassing data and it will vary from country to country. The UK is neither the best or the worst,” she said. More data about the nature of the requests would be useful, she added.

Google can provide such data and is examining whether it can release more detail about the requests.

Explaining the genesis of the tool, David Drummond, Google’s chief legal officer wrote in the official blog: “When Google’s services are blocked or filtered, we can’t serve our users effectively. That’s why we act every day to maximize free expression and access to information.

“Free expression is one of our core values. We believe that more information means more choice, more freedom and ultimately more power for the individual,” he added.

Google is keen to reassert its freedom of expression credentials after a very public spat with the Chinese government over censorship.

It threatened to pull the plug on services when it emerged that the authorities had been spying on some Gmail accounts.

It began re-routing traffic via Hong Kong but in June agreed to tweak the system to placate the Chinese government.

In July its license to do business in China was renewed.

Data on information requests from China is absent from the current map.

“Chinese officials consider censorship demands to be state secrets so we cannot disclose that information at this time,” said Google  – BBC