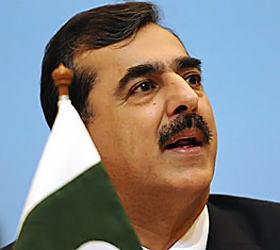 IF the Prime Minister is looking for an entry in the Guinness Book of Records for not missing a National Assembly session, he is up for a disappointment; many an illustrious head of government in the world’s parliamentary history must have done that before him. But even if he were to turn out as the only one to have performed that feat, it is a moot point whether the Guinness editors would consider it worthy of inclusion or cast it aside as Mr Gilani’s gaffe.
One must not forget that after all, Mr Gilani had an uphill task defending the PPP-led set-up’s record of performance before a well-informed audience of members of the Lahore Chamber of Commerce and Industry where he made the observation on Saturday, and finding no other suitable argument he could give, he put out this achievement.
The Prime Minister was obviously launching an ‘aggressive rebuttal of the negative propaganda’ against the government, in pursuit of the decision taken at the Presidency a couple of days earlier.
However, if anything could bring Mr Gilani the honour of a mention in the Guinness, it is the courage to go ahead with the construction of Kalabagh Dam that could be regarded as a historic achievement for various reasons. The construction of the dam would, first of all, entail persistent and tactful persuasion, with the help of experts, of its detractors to see its benefit to the nation, as a whole, that far outweigh the damage it could do to the ecosystem, and that in any case could be redressed by adopting certain environment-friendly measures. The reservoir’s waters would not submerge Nowshera, even when it is filled up, that is alleged by those opposing its construction. Munda Dam on the upper reaches would prevent damage to Khyber Pakhtunkhwa.

Kalabagh would remove the fear of a large-scale devastation that could occur without it, even if the future floods were not to be any match to the ones that hit the country lately. It would generate about 3000MW of cheap electricity, providing relief from loadshedding and high cost. A regulated flow of water from the 6.3 million-acre-feet reservoir would remove the spectre of scarcity. Foolproof guarantees could be given to the provinces about the allocation of water quota. The inroads from the Arabian Sea in the Indus delta could be stopped by building dykes. The example of the Netherlands, lying below sea level, is before us to follow. Removing reservations of Kalabagh detractors is, no doubt, a job, but it is doable and well worth the record that Mr Gilani wants to be honoured with – Nation