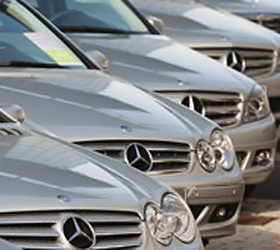 Regulators have raided the British offices of German vehicle maker Mercedes-Benz as part of an investigation into alleged price-fixing by major truck manufacturers. The Office of Fair Trading (OFT) confirmed it was looking into suspected cartel activity involving commercial vehicle manufacturers in the UK. It said it had launched both criminal and civil investigations into alleged price-fixing. One individual has been arrested and released on bail in connection with the case, the OFT confirmed. It said investigations were at an early stage and it has not yet decided whether the law has been broken. The organisation is also thought to have also requested information from German truck maker MAN and Sweden’s Scania. Read blog by Sky’s Dharshini David about the probe. The raid at Daimler’s Mercedes-Benz office in Milton Keynes is said to have taken place on Tuesday and the firm is reportedly co-operating with the probe. It could prove to be the watchdog’s most high-profile criminal cartel case since the collapse of the British Airways price-fixing trial. Under OFT rules, companies involved in price-fixing can be fined up to 10% of their annual turnover and executives face the threat of prosecution and a maximum jail term of five years.

An OFT spokesman said: “The OFT is investigating suspected cartel activity involving commercial vehicle manufacturers in the UK. “Investigations are being carried out under both the Enterprise Act 2002 and the Competition Act 1998. The investigations are at an early stage. “The OFT will not be in a position to conclude whether it considers the law has been infringed until it has completed its investigations and assessed the available evidence.” – News.sky