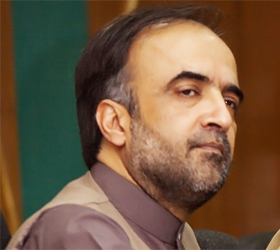 LALAMUSA, Sept 14 (APP): Federal Minister for Information and Broadcasting, Qamar Zaman Kaira said on Tuesday that the process of giving Rs 20,000 to each flood stricken family would be completed within 45 days.Talking to mediamen and various delegations at Dera Kaira here, the minister said that 3.5 million families would be given compensation in this process.He said that afterward Rs 100,000 would be given for house reconstruction through bank accounts adding that names and addresses of the beneficiaries would be posted on website to make the process transparent.To a question, he said that due to the devastation of flood,some change in opinion has been observed regarding construction of Kalabagh Dam. He added that some time back there was scarcity of water in Pakistan and now it is in abundance, however, the construction of reservoirs is inevitable in both situations.
He said as the Kalabagh Dam had become controversial, the government does not want to initiate any project which harms national integrity and wants to launch all projects with consensus.
About Pervez Musharraf, the minister said that he has ruled the country for nine years and the people knew him very well, however, it was his right to participate in politics if people like him.
Regarding desecration of the Holy Quran, Kaira said that burning of Holy Quran is a sign of sick minds, however, civil society and US administration has taken strict action on it and stopped this act. He said that no civilized society allows such action by anyone.
To a query, Kaira said that National Disaster Oversight Management Council is being formed in a few days which would consist of 13 members. Two representatives from each province, one each from Gilgit-Baltistan and Kashmir while three non-political representatives from the centre would be inducted in the council, he added.
Later, the minister listened to the problems of the people – APP
Twitter Facebook Google + Linkedin Comments