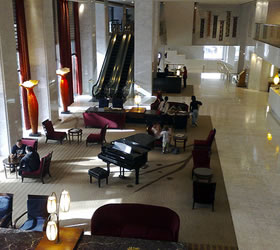 Japan-based Nikko Hotels International’s management of the hotel in Jalan Ampang may not be extended when the management contract comes to an end in February next year.

Instead, it is understood that owner MTJ Development Sdn Bhd may bring in InterContinental Hotels Group (IHG) – which operates brands like InterContinental, Crowne Plaza and Holiday Inn – to operate the hotel.

A source told Business Times that the new brand is likely to be the five-star InterContinental.

According to sources, hotel staff were briefed on August 27 by the owner’s representative. They were assured that they would be able to keep their jobs when InterContinental comes on board.

It is learnt that the hotel has some 400 employees.

Nikko general manager Michael Borostyan, when contacted, said: “Hotel Nikko will be undergoing changes in 2011. However, at this point in time, the board members have not officially signed a new management company agreement for the hotel.”

A quick check with Japan Airlines’ (JAL) Hotels Co Ltd website for Hotel Nikko showed that there were no more rooms available for booking from March 1 next year.

IHG vice-president of communications for Asia Pacific, Eric Lee, responding to questions on whether IHG will manage the hotel from next year, said that it did not have any news to announce at this time.

However, there is talk in the market that InterContinental has started to conduct interviews for placements at the hotel.

The 473-room five-star hotel has been managed by Nikko since July 1995.

Early last month, JAL announced the sale of a 79.6 per cent stake in JAL hotels to Hotel Okura.

The Japanese airline, however, was planning to retain an 11.1 per cent stake in the hotels as well as the brand names of the hotel chain it owns, including Hotel Nikko.