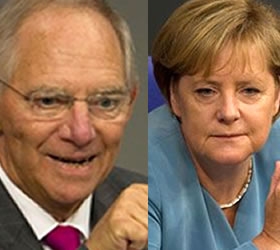 BERLIN: Germany’s efforts to reduce the deficit, which include sharp spending cuts and taxes hikes, are necessary to avoid a repeat of the euro zone’s debt crisis, the finance minister told parliament Tuesday.

High budget deficits across Europe were the main cause for the crisis that rocked the 16 nations sharing the euro earlier this year, Wolfgang Schaeuble told lawmakers as he presented the government’s 2011 budget plan.

Schaeuble called again for countries running overly high deficits to be punished, including the possibility to strip them of voting rights in EU institutions.

Schaeuble welcomed the European Commission’s forecast, published Monday, indicating Germany’s output will grow by 3.4 percent this year, but warned that next year’s growth will be more moderate.

“Next year, we won’t have this growth rate of more than three percent,” he said.

The minister said a sensible budget reduction will ensure a sustainable path of growth for the country. “Citizens have understood that such high deficits aren’t possible anymore,” Schaeuble added.

The opposition, however, accuses Chancellor Angela Merkel’s center-right government of sparing the wealthy and the corporate world, but reducing the budget deficit mostly by cutting social spending. “The only thing you could agree on are cuts aiming at the weakest in society,” opposition Social Democrat Carsten Schneider.  – Arabnews