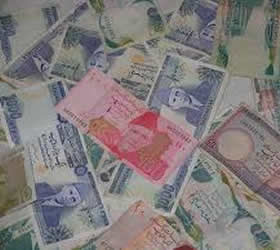 KARACHI (September 14 2010): The rupee tended lower against dollar on the currency market owing higher demand for the US currency during the week ended on September 9, 2010. On the interbank market, the rupee shed five paisa versus dollar for buying and selling at 85.70 and 85.75.

On the open market, the rupee shed 10 paisa in relation to US currency for buying and selling at 85.50 and 85.60. However, it gained sharply by Rs 1.19 against euro for buying and selling at Rs 107.71 and Rs 108.21 as the single European currency also fell in the international market. In the beginning session of the week, the rupee touched the low level at 86, in the meantime, the rupee shed its losses amid shortened week due to Eid-ul-Fitr holidays.

As a result of high payments for oil and other products, the country’s foreign exchange reserves dropped to 16.07 billion dollars. In the meantime, it is likely that the inflows in the shape of assistance for the flood victims in dollars may help in increasing the foreign exchange reserves. Additionally, the country received historic high of remittances of 933 million dollars during August. But many economists and analysts were saying that the rupee may not retain its present level due to higher demand for dollars for payment requirements.

On Thursday, the rupee maintained its overnight levels versus dollar for buying and selling at 85.70 and 85 75. In the short-run, the rupee may retain its present levels in terms of dollar.

OVERSEAS OUTLOOK FOR DOLLAR: In the first Asian trade, the dollar dipped and looked poised to test a 15-year low against yen after failing to retain gains made after US jobs data, although caution about Japanese intervention deterred further yen buying.

Less-dire-than-expected US payrolls data last week eased market anxiety over chances of a global slowdown and boosted demand for the euro and growth-leveraged currencies.

The yuan closed up against dollar on Monday for a third straight day after the People’s Bank of China fixed a stronger mid-point, signalling it had ended a round of moves to dampen yuan appreciation speculation.

Until last Thursday, the PBOC had set a slew of weak fixings, shrinking the yuan’s gain to as little as 0.2 percent since the central bank depegged the yuan from dollar on June 19. Malaysian ringgit was available at 3.1115 versus the dollar.

In the third Asian trade, yen struck a fresh 15-year high against dollar and edged closer to a nine-year peak against euro on a flare-up in worries over euro zone banks, prompting market players to test the will of Japanese authorities to intervene.

Persistent yen buying from investors seeking temporary refuge in the yen in the face of European bank woes and US slowdown worries helped to push the greenback through a major option trigger below 83.50 yen.

Malaysian ringgit was available at 3.1170 versus dollar; Chinese yuan was trading at 6.7970 in terms of dollar. Indian rupee edged higher on Wednesday, tracking a rise in other Asian peers, but losses in local shares and the euro kept a lid on the gains.

At 10:20 am (0440 GMT), the partially convertible rupee was at 46.77-78 per dollar, firmer than 46.84-85 at close on Tuesday. In the fourth Asian trade, the dollar neared a 15-year low against yen as traders bet that Japanese authorities were not yet ready to intervene, while the Australian dollar hit a four-month high on solid Australian jobs data.

The rise in the Aussie failed to give its usual fillip to US dollar against the yen, via trade in the yen crosses, reinforcing bearish views on dollar/yen. The yuan closed up against dollar after the People’s Bank of China fixed a stronger mid-point to reflect an overnight dollar fall in global markets.