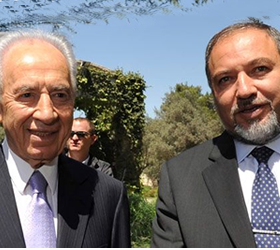 JERUSALEM: Israel sent conflicting signals on Mideast peace moves to the world on Monday. Prime Minister Benjamin Netanyahu told visiting US congressmen it was possible to reach a peace deal with the Palestinians in a year, while his foreign minister said his party will try to block any extension of Israel’s settlement slowdown, a move that could derail the recently launched peace negotiations.

Avigdor Lieberman said the government must keep its promise to voters that the 10-month slowdown, declared last November under US pressure in order to draw the Palestinians to the negotiating table, will end as scheduled at the end of the month.

The Sept. 26 deadline is a challenge for the fragile talks launched in Washington last week. The Palestinians say they will quit the talks if settlement construction accelerates, but not ending the slowdown could potentially bring down the Israeli government. Netanyahu has yet to say how he will handle the deadline.

“A promise is a promise,” Lieberman told Israel Radio. “We will not agree to any extension. I promise that if there’s a proposal that we don’t accept it will not pass.”

Lieberman’s Yisrael Beitenu party is a key member of Israel’s governing coalition, which is led by Netanyahu’s Likud party.

It holds 15 seats in Parliament, making it the second-largest member of the coalition and giving it the ability to rob the government of its parliamentary majority if it pulls out. Other coalition partners, and members of Netanyahu’s own party, also favor resuming construction.

Speaking to diplomats in Jerusalem on Monday, Lieberman said the stated goal of the talks — a peace agreement within one year was unrealistic.

On the other hand, Netanyahu told the visiting US delegation that he “believes it possible, through such direct and contiguous negotiations, held without breaks or delays, to achieve a peace agreement within a year”.

Netanyahu said he thought a goal of the Quartet of Middle East power brokers — the US, European Union, United Nations and Russia — to agree on the establishment of a Palestinian state alongside Israel was attainable, his spokesman Nir Hefez said.

The Israeli government says construction in settlements continued during previous rounds of peace talks, and that building does not compromise a future deal.

Lieberman’s party ran on a platform that questioned the loyalty of Israel’s one-fifth Arab minority, and Lieberman, known for blunt and often unpredictable language, is perhaps Israel’s most polarizing politician. A resident of a West Bank settlement himself, he has absented himself from active involvement in the peace talks, which are being conducted by Netanyahu’s office.

Vice Prime Minister Silvan Shalom, a prominent member of Netanyahu’s party, said extending the slowdown would pose a “huge danger” to the coalition.

“Within the coalition, there is a huge majority against it,” Shalom told reporters late Sunday. He said the issue could only be resolved through negotiations. -arabnews