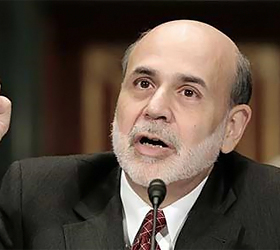 America’s wave of new financial regulation is likely to prompt the country’s biggest financial institutions to break themselves up, according to the chairman of the Federal Reserve.

“My belief is that a combination of tougher oversight and tighter capital requirements will take away the attractiveness [of being big],” Ben Bernanke told the Financial Crisis Inquiry Commission (FCIC) in Washington DC yesterday.

It has taken Congress almost two years to pass legislation designed to prevent a repeat of a crisis that toppled the country into its worst recession since the Great Depression. The Dodd-Frank law sets out to establish new protection for consumers, equip regulators with greater power to dismantle failing companies, and make it harder for firms to engage in riskier trades thinking the taxpayer will bail them out if they fail.

The question of how to handle institutions that are deemed too big to fail has proved one of the most vexed for global financial regulators. Mr Bernanke said that even without any direct government intervention, “we will see some break-up in the complexity of firms because of the incentives we provide”.

As in Britain, the revamping of regulation in the US has handed the head of the central bank unprecedented powers over the financial system. Mr Bernanke added that the Fed and other agencies will require strong determination to enforce the rules if another crisis is to be avoided.

The FCIC’s investigation into the events of the autumn of 2008 has been running almost a year, and it is due to report its findings to President Obama by mid-December. On what was the FCIC’s last day of testimony in the capital, Mr Bernanke also insisted that he and other officials had done all they could to save Lehman Brothers from collapse.

“I believed deeply if Lehman was allowed to fail, or did fail, the consequences for the US financial system and economy would be catastrophic,” Mr Bernanke said.

Unlike other institutions, including insurance company AIG, Lehman did not have the assets that the Fed would have needed to lend against, he said.

The chairman added that he wished he had been more “straightforward” in making this point in testimony to Congress in September 2008, when he said he gave the mistaken impression that the Fed could have saved the bank. Lehman’s $619bn (£402.2bn) bankruptcy remains the biggest in US history.

The need to vigorously apply the new legislation was echoed by Sheila Bair, the chairman of the US Federal Deposit Insurance Corporation (FDIC), who was also testifying.

She said that investors’ “concern about a financial meltdown of the system should be diminished” because under the Dodd-Frank Act the FDIC should have advance access to information that would allow an orderly unwinding of a troubled bank. Regulators “simply have no authority to do bail-outs any more”, she said, adding “we think that’s a good thing” – Telegraph