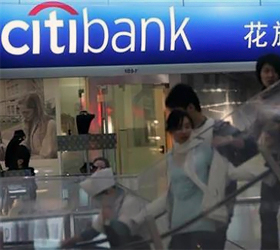 (Reuters) – Citigroup Inc (C.N) plans to almost triple its workforce in China by hiring up to 7,500 people in the next three years, an executive told Bloomberg in an interview published on Tuesday.

Citigroup, which has 4,500 employees in China, will hire more in that country that in any other Asia-Pacific market, according to Bloomberg’s interview with Stephen Bird, Citigroup’s co-chief executive officer for the region.

The hiring plans will support Citigroup’s efforts to expand in the region and compete with HSBC Holdings PLC (HSBA.L) and Standard Chartered PLC (STAN.L).

Bird told Reuters last week that Citigroup planned to open two branches a month on average in China for the foreseeable future, the maximum allowed by regulators.

A Citigroup spokesman did not immediately respond to a request for comment on Tuesday. The company’s shares were trading up less than one percent, at $3.70, by mid-afternoon – Reuters