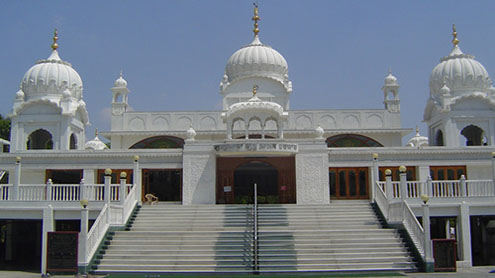 Darbar Guru Nanak is the sacred place of Sikhism in Pakistan that remains full of pilgrims worshipping silently. Volunteers there cook and serve thousands of free meals for pilgrims each day.”There are no foes no strangers,” says Sikh scripture, “for we are all fellow beings.”

Sikh history originated from Nankana Sahib. Guru Nanak Dev, the famous founder of Sikh faith, was born here in 1469. The place was then named Rai Bhoi di Talwandi. The landlord of Guru Nanak Dev was Rai Bular, who later himself became a devotee. Its name was changed later on as Nankana after the Guru. It is situated in Nilianwali Bar (forest where nilgais abound), and is about 75 kilometers west-southwest of Lahore, in Sheikhupura district and is linked to the district town by rail and road.

Numerous shrines are attached with the memory of Guru Nanak Dee’s childhood and early youth there. After many years Guru Arjan dev and Guru Hargobirid also gave Nankana Sahib a visit and a Gurdwara was also made subsequently to show honor to them.Nankana Sahib is one of the three shrines that is visited periodically by groups of Sikh pilgrims with the approval taken from the Government of Pakistan, the other two being Panja Sahib near Hasan Abdal and Lahore respectively.

At the darbar the Sikhs re-affirm their faith reciting the words of Guru Nanak Dev’s:”Union and separation have been created by my Lord, who having created Universe gave it pain and pleasure; but the Guru-oriented ones wearing the armor of faith are indifferent to pleasure and pain.” (A.G. 1032).The Gurudawar is a very unique place in the world as it has a grave and a Samadi of a religious scholar present on the very same premises. This place presents an excellent example of religious harmony, peace and co-existence of people of different faiths and sects.

It is not only Sikh who go to this hub of spiritualism but Muslims, Hindus and even Christians also often visit this shrine. People coming here are not seeking religious respite but also are looking for peace and spiritual sanity. This Darbar in Pakistan presents a golden opportunity for mortals to take some time out for meditation.In addition the Darbar is maintained and looked after by the authorities and the Government of Pakistan. This proves how hospitable and welcoming Pakistanis are to other religious as well. This accommodating behavior and their warmth to their Skih brothers is evident from how all Sikh festivity and religious obligations are fully aided by the Pakistanis. – Halima Khan