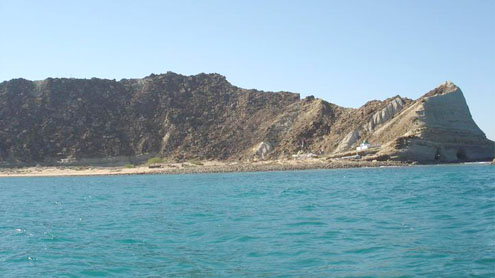 The beauty of Pakistan is hidden under the chaos in Pakistan. There is so much to explore and such great places for travel but due to security reasons people prefer a vacation somewhere abroad. Astola Island is one of them.


Travel is something that everyone wants to do. A lot of people have a list of places in the world that they dreamt o visit. Travelling is fun and at the same time learning as well, you get to see so many different cultures and traditions. Pakistan is beautiful but undiscovered. We Pakistanis get highly influenced by the western tourist attractions that we completely neglect on what we have in Pakistan. We have one of the highest mountain peaks in the world, endless deserts, heritage and what not. Yet when we are planning a vacation we prefer Thailand over Gwadar.

It is true that the tourism in Pakistan is not as developed but at the same time we can promote the places in Pakistan so that people from all around the world come and visit.Astola Island is one of these wonders that we have in Pakistan yet most of us have never been there. Travel is not all about luxury it is about exploring. Astola Island is located near Pasni in the Gwadar District in Balochistan. It is also known as satadip or Island of the seven hills. Astola is Pakistan’s largest off-shore island and also the only significant one in the Northern Arabian Sea. If you see the photographs of this Island you might confuse it with Thailand until you read that it is Pakistan. Astola Island is mainly used by fisherman to catch oysters and lobsters.

This Island is at an isolated location which helped maintain endemic life forms. There is a huge breeding of green turtles which is an attraction for tourists. There are many sea birds found at the Island such as gulls, plovers and sanderlings.The remains of an ancient Hindu temple of their Goddess Kali are also located at the Island this is the reason why Astola Island is known to Hindus as Satadip. There is also a prayer yard which is dedicated to the Muslim PirKhawajaKhizr who according to legend is said to rule the oceans. He is also believed to visit the prayer yard occasionally and offer prayers. The prayer yard is mostly used by the fisherman in the fishing season which is September to May.

There is not resort or a place to stay at the Astola Island but yet it is not impossible to stay there. People who are interested in camping can go and camp on the shores of this beautiful Island. The route to Astola Island is very easy its starts from Karachi and enter Gwadar through the Makran Coastal Highway. There is a sub district known as Pasni from where there are motorized boats which take you to the Astola Islands; it takes about 5 hours to reach from Pasni. There are also WWF programs through which you can get the booking and travel as a group. – Saiyna Bashir

PPL: Growth in wellhead prices to continue in 2HFY12

PPL: Growth in wellhead prices to continue in 2HFY12