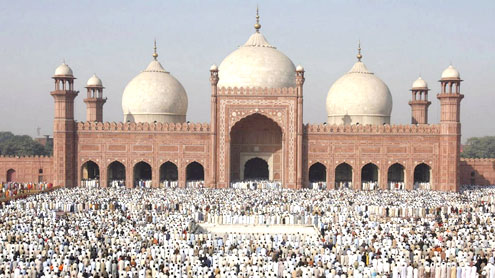 Badshahi Mosque is located in the heritage city of Lahore. It was made by the Mughal emperor Aurangzeb. The architecture of the Mosque is truly significant and is considered as heritage.

The Badshahi Mosque was built under the sixth Mughal emperor Aurangzeb Alamgir. The supervision was under Aurangzeb’s foster brother who was also appointed the governor of Lahore. It was completed in 1673. The mosque was constructed over a period of two years, opposite to the Lahore Fort. Another gate was built for the mosque known as the Alamgiri gate in the name of the Mughal emperor. The mosque has constantly been repaired under great professional architects to keep the heritage alive.

Very recently a museum has been added to the mosque which had again become a tourist attraction along with the mosque itself. The travel to this mosque is not difficult at all; it is in the heart of the old city of Lahore. To see this amazing creation of the Mughals one has to travel t Lahore and then take a local transport along the Mall Road to reach the Red Mosque. It is also advised to look around the old city on foot as there are so many small buildings and huge gates depicting the rule of the Mughal Empire. Winters are the best season to travel. It is also a huge attraction for photographers.

There is so much to see in the Badshahi mosque that is definitely a great part of the Lahore travel guide. The mosque is bold and majestic and it is truly mesmerizing just to look at it in peace. The interior of the mosque is unique in its rich embellishments, paneling and marble in lay. The major stone used in the mosque is the red sandstone which is why the mosque is also known as the Red Mosque. There is stone carving done on the exterior of the mosque. The architecture is incredible with the vast courtyard, the prayer chamber and the grand entrance gate. There is a lot to discover inside the mosque and knowing the fact that it was built in 1673 is what makes it truly amazing. The Badshahi Mosque is a must travel for local people as well as foreign tourists. – Saiyna Bashir