The lost city of Mohenjo Daro 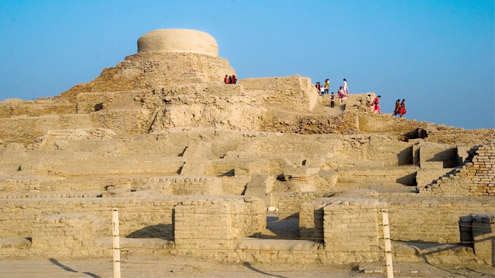 Indus Valley Civilization is known to be one of the most ancient civilizations.

This civilization is known for its skills and way of living. This society was an agriculture society gifted with fertile lands and Indus water. A gigantic part of this civilization was hidden until 1920’s; this part was Mohenjo Daro and Harrapa. Several excavations took place and in 1950’s subsequent diggings were done in order to investigate. Everyone was puzzled with the Mystery of Mohenjo Daro and how it has been explored. Archeologists wanted all the answers to lived there and what happened to them and what was there civilization like. Many archeologists started visiting Mohenjo Daro in an intrigue to find all the answers to their quest.

The city of Mohenjo Daro had a well-planned street grid, underground sewage system, and baked bricks, plenty of wells all around the city. The city was extremely well-planned according to those times. The findings showed that the people who had lived there were skillful and were very strict about cleanliness. A bathing area and drainage system was found in every house along with a well. The city does not give any traces of palaces, kings, temples or monuments.

The Mystery of Mohenjo Daro and many myths attached to them are because of their unknown fate. No one knows what exactly happened to the people of Mohenjo Daro and how the entire civilization vanished in to ruins. Whatever information the archeologists have is based on the art findings and digging of the city. It is still a myth where the entire city went because when the archeologists found the city during the construction of railroad, the city was under layers of silt.

But all of these myths get turned down when the archeologists say that they found skeletons while digging and their posture show that something terrible had happened to them because all the skeletons are found on the streets. The postures of the skeleton explains an entire scenario where parents are protecting their children in a cuddle and relatives are saving each other by holding hands.

But no one could escape. While carrying out the excavations scientists found that the radioactive contamination was higher than normal. The streets were full of black glass lumps. This shows that some enormous heat was evolved and no one could escape or buried or eaten. It sounds impossible that they had atomic power before we did.It is yet unknown that which one of these myths is actually true and the city still remains faceless. – Saiyna Bashir