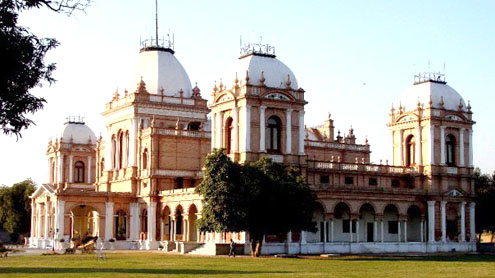 Bahawalpur is located in Punjab and it is the 12th largest city in Pakistan. The city was once was the capital of a princely state of Bahawalpur.

It has been ruled by various Nawabs and was a part of Rajputana states (Rajhastan, India).This hate has a rich cultural and architectural heritage. The glory of the Nawabs was the reason for such magnificent palaces situated in the city of Bahawalpur. This region in particular is very rich by having the famous Derawar fort in the Cholistan Desert. Noor Mahal, Darbar Mahal and Gulzar Mahal are the beauty of Bahawalpur depicting the success of the Nawabs and their love for architecture. The city is also located near the Uch Sharif where millions of people go and pay tribute. It is also home to one of the very few Safari parks in Pakistan Lal Suhanara which has a flock of almost 200 black bucks which has become a rare breed today.

The city of Bahawalpur is also known as the city of Nawabs because this princely state was founded by Nawab Mohammad Bahawal Khan II. The Nawabs have made an incredible contribution to this area in terms of architecture, education and armed forces. Nawab Sadiq Khan Abbasi is known for his contribution to education. He created educational institutions which are still one of the most prestigious institutions in the country Sadiq Public College. Libraries were built during his time and even today Bahawalpur enjoys a high literacy rate. At the time of Partition the Nawab of Bahwalpur decided to merge with Pakistan in 1947 and they paid endless contribution to Pakistan as a state.

Bahawalpur is famous for its handicrafts and it also a huge attraction to women in terms of jewelry and clothes. Kundan jewelry is what Bahawalpur is famous for and there are many markets where it is available in low prices as well. It is also popular for Chunri a form of printing on clothes with different colors, it originates from India and since Bahawalpur was once a part of Rajputana these items are still special in Bahawalpur. There is another form of silver work which is locally called Mukesh, silver dots on clothes look elegant and beautiful.

It is known as the City of Palaces because Bahawalpur has numerous palaces which depict the times when the Nawabs were in power and they also depict the colonial rule in the sub continent. The Nawabs were wealthy people and they hired architects from Britain and Italy to design and construct these palaces. When one looks at Noor Mahal for the first time it looks magnificent, a point where it feels like standing in front of a palace in England with its grandeur architecture. Darbar Mahal and Gulzar Mahal are also situated in Bahawalpur and they are under the possession of Pakistan Army. These palaces are being maintained by the Armed Forces and this is one of the reasons why they are still in a good shape. The city of Bahawalpur is a must see. It tells you about your glorious history and rich heritage.